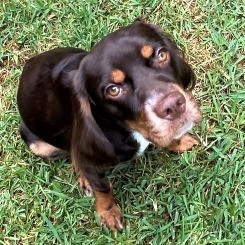 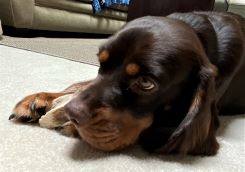 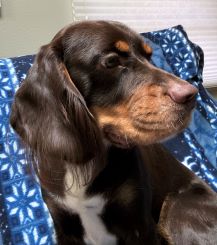 Due to the current situation with the COVID-19 (Corona) virus, in-person home visits are not possible at this time. Since this is a very important part of finding the best home for our dogs, we are not accepting any applications from first-time pet owners, applicants who have not had a pet in the past 3 years, or applicants who cannot furnish vet records.  We hope you understand and that you will consider applying to adopt once restrictions have been lifted.

Robby is a sweet and excitable puppy.   He’s also a fast learner, eager to please, treat motivated and has proven to be easy to train.  After only ten minutes in his foster home, he fully mastered the dog door.  After two days, he also learned sit, down, and shake and is now working on come and stay.  Robby is reasonably well mannered, rarely begs, and hasn’t chewed anything other than his antler toys.  He’s gentle when taking treats and isn’t a picky eater.

Robby is estimated to be 1.5 years old and weighs 34 pounds.  He is mixed with an unknown breed and has short hair that shouldn’t need much (if any) grooming but will shed more than a typical cocker.  He has no known medical problems.  He is house trained and hasn’t had any accidents in his foster home except a small marking when he first entered the house.  He uses a dog door when he is alone, so it’s unclear how long he goes between bathroom breaks, but he does not get up during the night to go.

He likes being outdoors and active and really enjoys taking walks.  Robby gets vocal when he’s excited (including on walks) and has a big dog bark.  He would benefit from some leash training.  He would love to be with someone who doesn’t come and go too often and who lives in a house because he will vocalize loudly (but briefly) when you leave and howls with delight when you come back home.  Robby has never been destructive, but at this point in his life it’s easier for him if he’s not left alone many different times in one day.  He’d also be happy to come along on your outings!

At the end of the day, Robby enjoys a good cuddle.  Even though he’s still a puppy, he’s usually up for some Netflix and chill time.  He’s never been introduced to other dogs, cats, or children – knowing his personality, he would likely chase cats and be too excited for small children but may be OK with other dogs and older children with a proper introduction.  It takes him a little time to warm up to strangers, especially men.

Robbie is a wonderful boy who bonds strongly with his people.  If you’re a person willing to give him some structure and a bit of guidance, he will reward you by being a fantastic companion for many years to come.