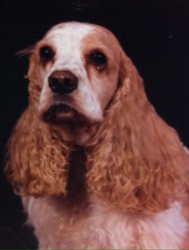 We picked up Patches (you had named him Willie) from the Carrollton vet a little over ten years ago. We were just going to foster for a while, but he quickly took over our hearts and became our baby. He was such a well behaved little gentleman, we were able to train him and get service dog papers and get the required blood tests, etc. so he could travel internationally with us. He had a European Union pet passport issued and has been all over the world with us - St. Petersburg, Russia; Copenhagen, Denmark; Reykjavik, Iceland; Berlin, Germany, and all over England and Scotland. He went on a 28 day cruise including Transatlantic crossing and became the star of the ship; most of the crew called him by name. After a debilitating illness, we let him go on without us today. Our new furbaby, Sundae, was adopted from DFWCSR in September, and she has brought us joy and love and will continue to do so, but our Patches will be sorely missed. Rest in peace, our beautiful baby boy.