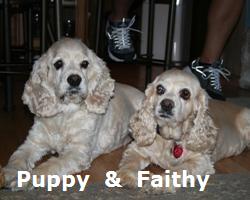 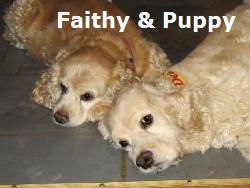 We helped Puppy cross the bridge 5 weeks ago. We had learned 2 weeks prior he had a mass in one of his lungs that was growing quickly. Puppy & Faithy were brought into DFWCSR together. They had been brought to a shelter because their owner was terminally ill. We think he was Faithy's puppy. Faithy was said to be 15 and Puppy 10 or 11. We decided to foster them. Puppy had major ear infections that DFWCSR had been trying to get under control. The infections were so bad that Janice & Sheila took him to a specialist near Houston, where they removed both of his ear canals. We have a soft spot for special needs & senior cockers. We fostered Faithy & Puppy until August of 2012 & adopted them in May of 2013. Puppy was always a very happy boy. He loved to play fetch with my husband & eat ice cubes. Faithy is my Velcro dog and is always at my side. They both brought so much joy into our lives and taught us many things. Senior dogs have a story of their own that they can't tell you about but they sure do teach us that no matter what, we can overcome what life brings us. Faithy is adjusting to the loss of Puppy. She is almost white around her muzzle, has a tough time getting up sometimes, doesn't hear or see well but she loves to be petted. She gets up every morning to see that the day will bring. Ice Puppy Chicken Puppy Love Puppy