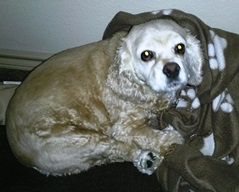 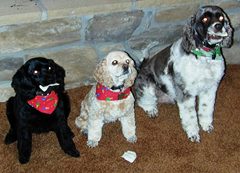 Sharra Lou (we added the Lou because it just fit her so well) was the last of our babies adopted through DFWCSR. Chewy, Suzie and Sharra Lou lived with us in TX, then Colorado, then back to TX. Sharra's original adoption text is enclosed and a picture of her from 2007 for the memories. It took us a year before she trusted us to walk up to her and pet her, allowing us to scratch her belly though when she was lying on the couch any time. And she loved her daddy. She got along very well with Chewy and Suzie Q (who are also memorialized both in 2014- Chewy from a "liver insult" which I believe was cancer, and Suzie Q definitely from cancer.) Sharra Lou recovered from mange, MRSA, had ear issues that were treated for the last two years, had a right knee repaired with fishing line surgery in 2015 and had cancer surgery 1-15-2016 which was confirmed to be MAST cells which had started in the mammary chain and migrated into lymph nodes on 1-28-16. Due to her age (we thought she was born on 2-1-06), we thought it best not to give her the chemo/radiation treatments understanding the prognosis of maybe 5 months to live. We treated her with an anti-cancer diet off the internet of basically 90 % lean beef, liver (which we could forward to anyone who might like to try it), and brown rice that I prepared in batches. Sharra Lou was very happy. She had 3 more surgeries to remove MAST cells (always type 2) last year and 1 this year on a cell on the base of her skull at the very back of her head. A tumor was revealed next to her spine and a shadow on her liver about the same time, but the last surgery was to give her one last chance because she was scratching it and drawing blood. Sharra Lou never knew she was sick. She bounced back from every surgery. Saturday January 21th in the late evening she was feeling off but accepted a half of a tramadol. Sunday January 22nd we rushed her to the Denton Emergency Veterinary Hospital when she went into what amounted to a doggie coma. She passed just upon arrival with us with our hands upon her giving her love. Sharra Lou had seizures from time to time which prompted us to put her on Blue Buffalo dog food which minimized them. They were similar to epileptic seizures. From the day that she started on the anti-cancer diet, she never had another seizure and our vet confirmed that she didn't know she was sick. The first picture was on the DFWCSR website (along with 3 others) and this was her story in April 2007: Hi, My Name is Sharra. The people at DFWCSR rescued me and some of my friends from a puppy mill. We were all taken to the vet and we are now ready for a forever home. My name comes from a book by Anne McCaffrey. Sharra is a character who is known for healing others. Now instead to doing the healing, I need a good family to heal my heart and soul. I am very scared right now because I have never been inside a house before and boy, there are a lot of scary noises. Right now I feel safe under the kitchen table and really only come out to go outside, but when my foster dad comes home I go straight to him. Not to hurt anybody's feelings but right now I feel the safest with him. If you are a patient, loving family then I am the puppy for you. Sharra is about 1 year old. We just rescued her and she is still figuring everything out. I do not think she has been inside a house before. She pretty much stays under the kitchen table for now. Right now she is very shy and kinda scared. She really only takes to her foster dad. When Sharra goes outside she is much spunkier and gets along well with the other dogs at the house. She needs a patient family with lots of love to give and probably only older children, if any. Sharra is just a puppy so we are working on potty training and sitting etc. Keep checking back and I will update you and send more pictures as she becomes more comfortable. Thank you for what you do. The Three Amigos are together again. ~ Thomas and Adrienne Pohrte