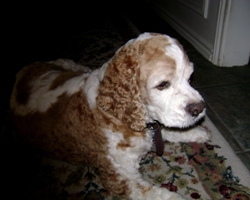 Winston’s Last 4 ½ Wonderful Years! Winston was surrendered to the Fort Worth Animal Shelter because his owner was taken to a nursing facility. The shelter worker told Cocker Spaniel Rescue that he was one of the sweetest dog's she had ever seen there, but no one wanted to adopt this beautiful boy because he was old and fat. The shelter worker was desperate to save him from being put down in two days, CSR intervened and put out the call for help, something just set my heart on fire when I read the email about him. Winston, my beautiful rescue Cocker Spaniel, died this past weekend. I told CSR I would help out by picking him up and taking him to the vet for a checkup. They took him from the cage at the shelter and he immediately put up his paw to shake. Winston sat by me just like a gentlemen as we drove home to Denton. His vet check was good, so I said I had room to foster him for a short time because I had two other cockers and a cat to take care of. When we got home I helped him out of the car, then I opened the door to the backyard. He lopped out of the garage right into the swimming pool. What else could I do but jump in after him. I am swimming towards him and he is swimming towards me… both of us scared to death. We bonded at that moment and we both knew he was home! Why would anyone want to adopt an old, fat dog? Because they have so much to give in a very short time. During the next 4 ½ years Winston, our friend Jay, Cocker Spaniels Jamie & Jasmine, Annie the cat and I enjoyed and loved each other very, very much. He was the perfect addition to our family. Oh, and he did learn to walk ‘around’ the pool. With Janie's death last July and now Winston’s death, Jasmine and I are lonesome… I even think I see lonesomeness in Annie Cat. My favorite quote: “If there are no dogs in Heaven, then when I die I want to go where they are. Will Rogers